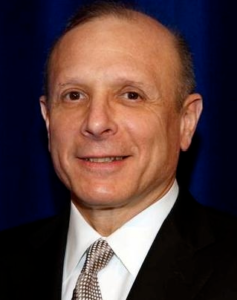 Barry S. Eisenberg is a Chicago-based expert in association management with over with over 35 years of responsibility and accomplishment in CEO, line management, and staff positions. He joined the Board of the LARC Foundation in 2018 and became Board Chair in 2020.

In 2017 he retired as Executive Director of the American College of Occupational and Environmental Medicine (ACOEM) – a position he held since 2001. Prior to joining ACOEM, Mr. Eisenberg was employed at the American Medical Association (AMA) in Chicago, where he held a number of positions in economic research, strategic planning, health policy development, and as Vice President for Membership and Information Services.

Previously he served as a member of the Board of Directors of the American Association of Medical Society Executives (AAMSE). He was elected as a Fellow of the Institute of Medicine of Chicago (IOMC) in 2004 and served in a variety of leadership capacities within the Institute, including as President from 2012-2015. He is a founding member of the Foxglove Alliance.

THANK YOU TO OUR CORPORATE SPONSORS